Faced with Mikaela's  unexpected death, her family created a beautiful vigil for her in the hospital. 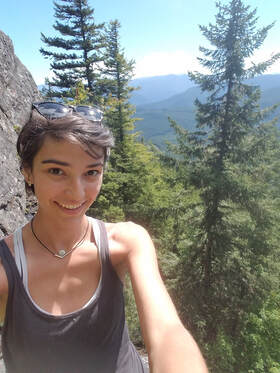 An Unexpected Death
On March 20, 2018, in the late afternoon, the doctors entered Mikaela’s room to give us the news that the blood flow to her brain was minimal. What they really meant was that her brain had swollen to a point where she would no longer recover. March 21, early in the morning they officially pronounced her brain dead. At 22 years old, our beautiful daughter Saajeda Mikaela (she went by Mikaela) would no longer walk this earth in the ways that delighted and encouraged us all to be better humans.

Only a few weeks earlier she had caught the flu. It had followed a similar pattern to what her younger brother had a month before: fever, aches, and exhaustion. Hydration, sleep, and immune support were part of the daily effort to help her fight the bug. Then something went awry. On March 8 she wasn’t responding to texts or phone calls. Her father traveled back to the house to check on her. She was out of it and not speaking, instead moaning. He couldn’t get her out of bed to go to urgent care. At that point 911 was called and this journey began.

Her immune system turned on her and mistook the grey matter in her brain for the virus. A medically induced coma and treatments to remove the rogue white blood cells from her blood were implemented. For 12 days we all did our part to care for her. She wasn’t waking up so there was a decision to perform a tracheotomy. After the meds wore off, her pupils were not dilating. They rushed her to the MRI machine and gathered a larger team of experts to try to figure out a way to save her life. It wasn’t meant to be.

I Knew What I Didn't Want for My Daughter
Having lost my mother at 17, along with many other close loved ones over my lifetime, I was no stranger to the steps that could be taken next. I had already walked through the doors of many corporate funeral homes to be greeted by an appropriately consoling individual—they were usually men—who had the script down to a science. Then the push to sell so that my “loved one has the very best.” Gently reminding me that these purchases are the best way to honor my beloved human.

I knew that this was not what I wanted for Mikaela in any way, shape, or form. I didn’t want to be away from my child’s body. I didn’t want anyone to care for her except those that I had chosen along with myself.

Mikaela and I had talked about death a decent amount as she grew up. (See Part 2: Green Burial.) It was through these conversations, despite my devastation, that I knew how we needed to care for Mikaela’s body in her final journey. It was time to weave together the threads of the traditions and teachings I had been raised with and acquired in my spiritual journey as an adult. The honoring of my Muslim upbringing. The teachings of my spiritual mother who is Cherokee. My learnings through the years of caring for other loved ones in their completion of this life.

Speaking to my husband, my son, and Mikaela’s boyfriend, the four of us had to be in agreement every step of the way. We represented the four directions that held the container for her transition from this world. She held the center of father sky, mother earth and spirit, and we held her. We invited a small group of very close friends who were like family to be part of the weaving. Each of them holding us, holding their own threads of the fabric, to help us weave the tapestry of her passage.

Weaving the Tapestry of Her Passage
There is the tactical and practical life stuff that must happen in situations like this. There is also the sacred that moves throughout this walk. Finding ways to bring them all together was the wish that sat in my soul as we moved through this time. The first tasks included reaching out to White Eagle Memorial Preserve for burial, which a dear friend took the lead on. At the same time, I was talking to the medical team about the requirements around potential organ donation, taking her off of life support, and autopsy. There were many moving parts. It was important to me to make every step of this journey sacred, a moving prayer of honoring Mikaela’s life with us. It took our village to bring this to fruition.

For me everything hinged upon being able to bury Mikaela ourselves at White Eagle. Though Mikaela was a self-professed atheist agnostic, it felt important to weave in Islamic burial traditions because they honored our family of origin. These traditions also honor the care of the body through sacred washing and shrouding. We wanted as much “other worldly” support as possible to ensure her soul traveled safely in the transition.

My father had requested that we keep Mikaela on life support until he was able to return from out of state. We huddled as a family to discuss the situation and the tasks that needed to be completed. Were we all in agreement? Yes, all around. The hallowed walk began. The end of her time on this earth and the start of our journey without her here. In shock, and moved to show her our love through these actions.

With the big decisions handled, the tactical tasks aligned to legal requirements and transportation, we organized the right people at the right time to allow for the journey to go smoothly. The soul tasks, to me, were equally important because they were the weaving of the sacred fabric that would hold us all in this transition. In writing this over two years after it happened, I realize that holding this container of the worldly requirements while balancing them with the blessed walk of honoring was no small task. This was my soul gift to my daughter. It all had to be woven into the most unimaginably beautiful picture I had ever experienced, as a small way to convey my deep love for her.

The hospital staff was beyond amazing and brilliant. Constantly checking in with me, asking how they could help, what we needed and how they could support our plans. It was agreed that Mikaela would be removed from life support at 5 am on Thursday, March 22. There was a requirement for an autopsy of her brain to help us better understand why she died. It was an uncommon outcome for her working diagnosis. Then her body would be taken to the Islamic Center for washing and shrouding. From there, we would drive her to Eastern Washington for burial at sunset. At least that was the plan. (See Part 3: Burial Permit.)

As for the soul tasks: they were less “tasks” and more like small soul gifts that were a vital part of our journey from the time we entered the hospital. As part of my training and spiritual path, creating a sacred and peaceful space is essential in all forms of healing and self-care. From the time we entered the Neurological Intensive Care Unit, we began to create a safe and tranquil environment to soothe the “storm” that was going on in Mikaela’s brain. An altar, soft lighting for resting time and night, her favorite classical music, along with some "Hamilton" for times when we had a lot of activity in the room. It was important to carry this energy throughout our journey because balance is vital in these hardest of times.
​
Supporting Her Soul on Its Journey
That first night as we were digesting the news that Mikaela would not survive this, my soul traveled into the space of the sacred. Every step to honor. Her boyfriend and I sat with her, guardians keeping watch. As I dozed in and out, he sat in a folding chair next to her. It was one of the most beautiful acts of love I have ever seen. A young man, holding space, not even knowing that was what he was doing, simply being with the girl he loved so dearly. It was humbling.

That afternoon, I had gathered the men and women of our small group for a pause in our planning, a time for us to come together and honor this amazing young woman. A sparkling bundle of joy, delight, and grace in this world. A girl who valued her brain above all other things and was on the path to becoming a lawyer focused on social justice. Her passion for doing good in the world and honoring all living creatures only added to her sweetness. She was fiery and feisty, with a penchant for debate that few could match. Her delight in the simplest of life’s pleasures is what made her company so intoxicating for all who encountered her. We stood in a circle around her bed. Hands on her, voices raised in gratitude for our time in this world with her. Reminding her of how precious she is to us all. Thanking her for choosing us as her family.

When the sacred space was set, the men left the room. They stood outside her room like sentries, protecting us and holding space. Inside the room, we women gently, lovingly, and carefully washed Mikaela’s still-breathing body. Prayerfully ensuring the vessel that carried her for 22 years was as honored in her last days as I had honored her in the first day of her life on earth. When this was complete, she was dressed and covered in the medicine blanket we gifted her during her rite of passage as a teenager. The boys entered the room, we said a few more prayers, and from that moment onward, the vigil was held. She was never to be left alone in the room until all life had left her body.

I awoke early the next morning for my daily spiritual practice, sadhana. Kundalini yogis speak of the ambrosial hours, the two or three hours before sunrise when the veil between the two worlds is thinnest. I rose, texted a few close yogi friends who would also be performing the Aquarian sadhana from their home at the same time. Think of this as a meditation that lasts for 2.5 hours, honoring the divine within and all around us. I began, just Mikaela and I, there in her hospital room. I sang, I chanted, I cried. I kept moving through my mantras, the prayers to hold us all on this journey. Her boyfriend arrived and joined me in the practice.

Then the time was upon us. A song, a mantra, a chant to support her soul on its journey to the other realms. I laid down in her bed and held her close. Her boyfriend held her hand. Her father arrived and held her feet. The respiratory therapist asked if I was ready. I looked at him, shook my head no, and then said, “She is ready and it is time.” With that, we held her, as what remained of her living in this world departed.

I invite all who read this to envision what your tapestry may look like for the end of your life journey. There is beauty, even in the hardest of times. Finding it and gently coaxing it out can have its challenges—but it is possible. Like any parent that has lost a child, I would give anything to have not lived this experience. Yet even in her death Mikaela has been, and continues to be, one of my greatest teachers.
​
In this experience, she taught me that I can create beauty in death, in my deepest loss, that honors what I hold most precious. My child.
Read the rest of Mikaela’s Story: Part 2: Green Burial and Part 3: Burial Permit.

Mikaela’s Story is told by her mother Zaakera Stratman