Briar, whose friends memorialized her with a joyous water ballet, donated her body to help legalize natural organic reduction. 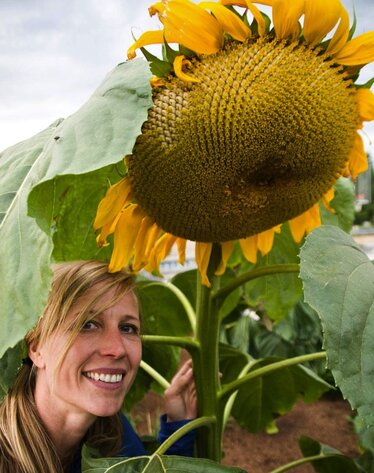 A few years back I met a woman named Katrina Morgan at a home funerals class offered by Final Passages. At the end of the intensive weekend of training, Jerrigrace Lyons cautioned us that one of us would leave the room and be called to utilize the skills learned in companionship with a loved one.

We couldn’t know at the time that this someone would turn out to be Katrina, whose friend Briar was diagnosed with metastatic melanoma sixteen months later. Suddenly, Katrina’s apprenticeship with hospice volunteering and deathbed vigiling would shift from the public to the personal.

*     *     *
Cancer came on hard and fast for 42-year-old artist Briar Bates. Even as illness rendered her exhausted and in pain much of the time, Katrina shared with The Seattle Times that Briar still continued to mastermind creative projects.

The winning idea came to her in bed, “looking up at a chandelier she’d made with Barbie dolls in swimming caps and a symmetrical, Busby Berkeley-style formation,” according to the newspaper profile of her unconventional exit. “She wanted her friends — mostly artists, but mostly nondancers — to perform a joyful and awkward water ballet titled ‘Ankle Deep’ in the kiddie wading pool at Volunteer Park.”

Briar was also making plans in her final months for how to dispose of her body in keeping with her earth-based values. As a landscape artist renowned for repurposing natural ephemera into large art installations, Briar knew she wanted, in the words of Walt Whitman, to bequeath herself “to the dirt to grow from the grass” she so loved.

In early March of 2017, Katrina and Briar began discussing the possibility of Briar becoming the first human to donate her body to be recomposed, as part of a new and alternative mode of disposition being piloted at Washington State University. Katrina had turned Briar on to this possibility and Briar loved the idea. She initially envisioned being buried in her own garden lands on Vashon Island but state laws require designation of the land as a cemetery and the costs to do so were prohibitive.

When Briar died at home in late June of 2017, she was surrounded by her community of close friends, who bathed, anointed, and dressed Briar in the dress she chose, and who later laid her into the simple box her friend built for her.

At Briar’s request, there was no makeup applied to her face and her hand-painted fingernails were left with dirt under them, as fresh flowers were then placed in her hands. The following day, her friends carried her on a circuitous path through the gardens and into an enchanted clearing in the wood on her property. Friends and family came to spend time with her there, placing letters and flowers around her body. One dear friend observed aloud that this unique home funeral experience was so strange, to which a five-year-old responded, “There is nothing strange about this at all.”

Not surprisingly, everything about her dying time had an organic and artisanal feel to it. In death, as in life, Briar was turning Walt Whitman’s words into her own indelible epitaph: “to the dirt to grow from the grass”.

Some months later, Katrina admitted to me that aside from their bedside vigil with her in the days before and after Briar’s death, and the water ballet/aqua follies-style flash mob her friends had enacted for Briar at her request, they had yet to formally gather to grieve as a group. I nudged Katrina to consider marking the time prior to Briar’s final disposition ceremoniously. And so we began to work together to make that happen.

Briar’s father was arriving in the days around the winter solstice and so in mid-December, Katrina and I set to work co-crafting a commemorative vigil that would do justice to Briar’s creative spark and allow her father the cathartic time and space to hear stories from her closest friends who were her Pacific Northwest family of choice.

At one point in the planning, we even considered doing something with water ballet Barbies as a nod to the chandelier that inspired the water ballet performance.

Briar was wildly creative and that showed up in the nature-based community art installations she made. To honor this, I suggested that as Briar’s cohort of friends sat in circle with her father, they could collaboratively construct an earth altar comprised of earthly foragings of twigs, pinecones, flowers, and boughs from her island property.

A poem by Marge Piercy entitled “Kneeling Here I Feel Good” proved ideal to open the ceremony, honoring Briar’s earth-centered choices in both life and in death.

A good portion of their afternoon together was spent sharing laughter, tears, and stories of Briar’s unique essence and gifts. As one person shared cherished memories, others would take turns placing items upon the altar mandala they were co-creating in Briar’s honor. As a closing ritual, everyone placed a flower and organically shared a personalized litany of remembrance that spoke to all the various sensory prompts that would have them remembering Briar.

Ever the ground-breaker, Briar was the first of six people who donated their body to Recompose to test the possibilities and modalities for human recomposition.

When the proposed legislation legalizing natural organic reduction was presented to the State House and Senate committees in Olympia during the late winter months of 2019, Katrina was there to share Briar’s poignant story with lawmakers and provide these heartfelt words of testimony: “It is important to state that it was a tremendous spiritual relief to Briar, her family, and her friends that she could become soil. That, in dying, she would not be forced to pollute the earth. That instead she could nourish it.”

The outcome was successful and subsequently, Washington became the first state to legalize natural organic reduction as a method of final disposition.

When Recompose opened its doors to the community in early 2021, yet another litany of remembrance was added to the list of things that have us thinking of Briar. For in both life creed and final bodily deed, helping pioneer a revolutionary new mode of human deathcare…we will remember her.

Compost: rich as memory,
sediment of our pleasures,
orange rinds and roses and beef bones,
coffee and cork and dead lettuce,
trimmings of hair and lawn.

I marry you, I marry you.
In your mingling under my grubby nails
I touch the seeds of what will be.
Revolution and germination
are mysteries of birth
without which
many
are born to starve.

I am kneeling and planting.
I am making fertile.
I am putting
some of myself
back in the soil.
Soon enough
sweet black mother of our food
you will have the rest.