Jake's engagement with the details of his death was a powerful gift he gave those who performed his home funeral and burial. 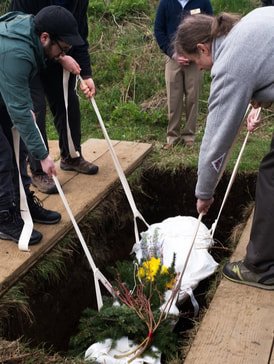 Jake Seniuk and his wife, Donna James, contacted me for a green burial consultation. After hearing that families can care for their own dead at home in Washington State, and can drive a loved one from the house to the burial ground themselves, Jake and Donna were eager to learn more.
​
I was grateful for the chance to work with Jake while he still had the energy and desire to make his own plans. It is not often that I can meet with the person who is actually dying, and help him imagine what he most wants. Usually a family calls me, and I work with them instead to craft a vigil—hopefully based on the dying person’s wishes, but often just arising out of the present moment and what the family can handle by then. Being able to work directly with Jake before he died was a privilege, one that strengthened my resolve to help people plan ahead, imagine what they really want, and share those wishes in person with family and friends. It is my experience that picking a team, and facing one’s death together with the ones you love, can be one of the most powerful gifts you can give yourself and others before you die. ​
We gathered in the cozy living room, friends and family making a circle of togetherness around Jake, who was so weak he had to lie on a chaise lounge in his silk bathrobe and only occasionally sit up to add his voice to our conversation. There was no question about who was in charge though. Jake was dying, and he was orchestrating all details of his departure, like the artist and wise sage he was.

“Let’s look upon this after-death care as my last art installation,” Jake said, his voice carrying a lightness of being nobody else in the room was feeling. “You can even mount me on the wall if you like,” he joked, making his sons laugh, and Donna smile through her tears. As the home funeral vigil and green burial guide, I was there to help Jake’s loving team learn how to care for his body after death, wrap him in the linen shroud he had chosen to be buried in, and transport him themselves in a van to a natural burial ground—where Jake’s beloved earth could receive him back in simple and life-giving ways.

We went around the circle, and people spoke first of their hopes and fears, so that the truth and reality of why we were there could live and breathe in the room, informing us. I asked if anyone had any concerns about Jake being at home after death. Jake’s son Tristan admitted he was worried about his father’s body smelling. Wouldn’t that be a problem? I assured him that there would be no smell to speak of if Jake were bathed and dressed, and they used dry ice to cool the body down. I thanked Tristan for being so forthright with his question. It helped drop us to a level of sharing that was more intimate and real right away.

One of Jake’s friends had the courage to express his anger and aversion to the whole idea of Jake dying, much less having a home vigil. Jake’s response was so moving. He acknowledged his friend’s feelings and didn’t try to change them in any way. At the same time, Jake spoke of his own growing interest in the great adventure he was facing, and how he hoped his death, and caring for his body afterward, could be a teaching and help heal the way we think about dying. I witnessed Jake’s friend shift his resistance and become one of the key contributors in our training that day. He went on to participate in Jake’s home vigil and even drove the van that carried Jake’s body to his final resting place.

I watched Jake drink in this honest sharing from those he loved, and find nourishment and support to turn more consciously toward his pending death. He seemed to settle into a greater understanding of what lay before him, willingly taking part in practical planning, but holding always the deeper vision and spirit of what was transpiring for us all. Jake’s strength of soul and his grace helped everyone else in the room come to a greater acceptance and peace that day.

Though Jake was not expected to die right away, he was gone within a week of our gathering, as if the support generated by that circle lent him courage and resolve for his journey. His home vigil— with sons Tristan and Markus doing the paperwork and handling the dry ice, Donna’s attentive care, and others there to aid and comfort—was, in Donna’s words, “transformative.” After shrouding Jake’s body, and placing mushrooms in the folds, in honor of his original wish to have an Infinity Burial Suit, Jake’s team drove his body themselves up the highway to The Meadow, a green burial ground in Ferndale, Washington. This caring for Jake at home, and laying him to rest in a natural grave, helped weave his creative life and death together as one. It was Jake’s final gift of art, in collaboration with his willing family and friends—a gift of fierce beauty and wholeness.
Fierce Beauty, adapted excerpt from Reimagining Death: Stories and Practical Wisdom for Home Funerals and Green Burials by Lucinda Herring, published by North Atlantic Books, Copyright©2019 by Lucinda Herring. Reprinted by permission of publisher. (https://www.penguinrandomhouse.com/books/576929/reimagining-death-by-lucinda-herring/)

Photos by permission of Tristan Seniuk.