Karen ​served as funeral director for her father, who was buried at White Eagle in a casket built by a friend. 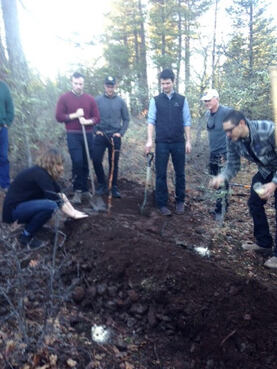 On a cold January day, with the blessing of my brothers, my mother, the hospital social worker and my father himself, I brought my father home from the rural hospital that had done his diagnostics that day. We brought him home to die. Thirty years earlier I had cared for my grandfather, my father’s father, as he died and had always hoped that the roll of the dice would include my caring for my father as well. As it turned out, it did.

Only a few months before, my parents had reluctantly moved from the ten acres of land above White Salmon, Washington that they’d called home for almost thirty years into an adult living complex that accommodated them when my father could no longer drive. In this still unfamiliar place, we began to make do. Hospice was called and the hospital bed ordered. My brothers, their wives, and two of my nephews arrived and we began to tend to what was before us to tend to. Phone calls were made to family and friends and the visits began as loved ones came to say their gorgeous and heartbreaking goodbyes. The door was open and this continued until the night of my father’s last breath, a week later.

In the first few days after the hospital bed arrived, my father announced that after being certain for many years that he wanted to be cremated, now that he knew he was dying, he questioned whether he might rather be buried beside my mom when her turn came. My mom had learned a few years earlier about White Eagle Memorial Preserve Cemetery in Goldendale, and had made known to us her wish to be buried there. I explained the options to my dad and how each would play out and at that point my father chose and expressed his wish to be buried.

A phone call was made to a young man I know who graciously paused his days to build my father’s simple pine casket. Another friend guided me in making contact with Jodie Buller at White Eagle Memorial Preserve in Goldendale, Washington. This friend was also willing to obtain the “Home Burial/Funeral Packet” from the Oregon Health Division’s Center for Health Statistics on my family’s behalf. The packet specifies the rights and responsibilities for families or loved ones who wish to serve as their own “funeral services practitioner” to handle some or all of the tasks commonly outsourced to a funeral director. Despite our heartbreak that my parents couldn't live and die in the state they'd called home almost their entire lives and, in the house, and on the land, they'd loved for almost thirty years, I was grateful that their residence in Oregon made the legal logistics of caring for my dad as a family so smooth after he died.

Knowing my father would be in our care until he was buried, I spoke with the long-time manager of the facility where my parents lived. I asked her the protocol for residents leaving the building after their death and she questioned the legality of not using a funeral home. When I assured her what we planned to do was legal she let me know the funeral home always did removals through the freight elevator that took them down to the parking garage so as not to upset the other residents. I forgot to ask where the freight elevator was.

After my father died, we washed him, dressed him and for two days kept him with us. Many times during those days I saw my mother pull up a chair and sit quietly beside him as he laid covered in flowers and a beautiful blanket. She expressed later how glad she was that it wasn’t strangers who came to take him away. When his casket was delivered, he was placed inside and we respectfully waited until most residents were at lunch. My father left the building through the front door, the same way he came in; only this time with his loved ones carrying him. He was then transported in a family van to White Eagle Memorial Preserve. The day was dry, the sky, blue and all of his children, his grandchildren, and a few friends were there to carry his casket and lower it, gather round him, share a toast, and offer blessings as family shoveled soil to plant him in the ground.

Navigating Oregon’s “Home Burial/Funeral Packet” was amazingly straightforward, but found me breaking new ground as I followed the instructions with the county clerk’s office. When my brother and I arrived in person to file a notice of the death and the death certificate, the long-serving county staff had never had a family member do so, and placed a call to the state office to confirm how to handle this unfamiliar scenario. Once they were assured that what we were doing was legal, they were clearly moved by seeing a family member in this role, and were glad to help.  We were also easily able to get my father’s doctor to sign the death certificate before it was filed. With relative ease, despite our lack of experience, my father never left our hands until we ourselves, as a family, buried him.
The original version of Karen’s story appears on the Oregon Funeral Resources & Education website. (https://www.oregonfuneral.org/karens_story.html)
​
Read more stories...